Read What’s to Love about Utah

There is no doubt that the Church of Jesus Christ of Latter-day Saints has benefited society, in general, and Utah, specifically. The crime rate is low and people are nice. But from UtahOutsider’s perspective, certain traits of this majority (about two thirds of Utah’s population is LDS) leave me feeling unwelcome and downright cantankerous. 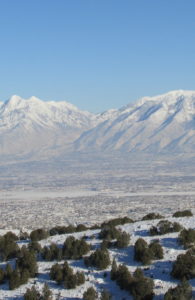 While Mormons say they have an appreciation for wilderness, their personal and policy choices belie the sentiment. The tradition of large families, for example, translates to rampant development. In Salt Lake and Utah counties, planners project farmland to be completely converted to housing developments within the next decade. The dreaded Inversion (in which cold, smoggy air hunkers down in the valley and creates poor air quality) gets worse every year.

But when you talk with Mormons about development and industry, a strange veil of denial and cognitive dissonance seems to descend upon them.

I asked an LDS stake president (similar to a bishop in the Catholic church) what he thought of the gung-ho extraction industry, specifically, the Kennecott mine which sits less than a mile from my Utah home. It is the largest open pit mine in the world.

“I don’t think I’ve ever considered the mine as something that will permanently be there and that now a mountain is permanently gone. And is that a bad thing, a good thing, or a neutral thing?” 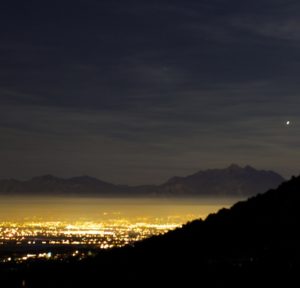 1.5 million in the valley. Make that 3 million soon.

This guy is a highly intelligent, successful man who likes to hike and enjoys the outdoors.

One of the pillars of LDS culture is obedience. Accept authority. Fall in line. Tough territory for this contrarian. But really, I think it stymies discussion and thwarts possibility for trickle-up change. Just ask Kate Kelly, co-founder of Ordain Women. Maybe I’m oversimplifying and confusing the Mormon majority with the Republican majority (although statistics show they are one and the same).

Maybe it’s the Mainer in me.

Mainers tend to operate within their means and have a keener sense of sustainability. They have learned how clear cutting and overfishing pays nasty dividends over time.

In Maine, there is more discussion (some would say rancor and intransigence), more retrospection, and less railroading (Utah’s legislative Republican majority is over 80 percent). Read one Mainer’s take: an op-ed by Uinta Brewing’s Will Hamill (a Maine native living in Utah).

Here, the enduring frontier mentality, along with the LDS culture, combine for a lethal mix for the environment: Get it. Use it. Toss it. Get more. Take a trip to the landfill. 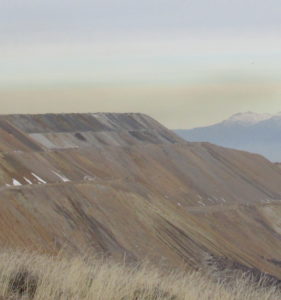 Sometimes in Utah, I want to scream, “Stop. Look around. Think!”

Mormons’ line toeing tendencies creep into every aspect of life, but perhaps most clearly in their diet: the Word of Wisdom is an LDS law that labels coffee, tea, alcohol, and tobacco as harmful. It was a well-meaning message of healthy living, written in 1833. It also said eat meat sparingly and don’t forget your fruits and vegetables.

But the message has been blurred and retooled. Vices sneak in. Energy drinks and sodas of all kinds pass muster even though we know these are far less healthy than coffee and tea. Pioneering Mormons didn’t know about prescription drugs either.

Addictions and depression abound in Utah. Did I mention the state has the highest suicide rate in the country?

Read What’s to Love about Utah

Posted in Of Utah Interest.