Population growth and housing development are strong, brotherly winds that Utah farmers have leaned into for years. They’re as relentless as the passage of time.

“You can fight it, but you can only fight it for so long,” said Randall Ercanbrack, a fifth-generation farmer in Orem. “When you get surrounded, the pressure is too great. There are too many obstacles.”

Ercanbrack, whose family started farming here in the 1880s, predicts his hometown will be devoid of agricultural acreage within five years. The homestead is surrounded by new, expensive homes. Neighbors complain about his early hours with machinery and with chemical spraying, he said.

“They don’t particularly like what I’m doing. They don’t particularly understand what I’m doing,” Ercanbrack said. Aside from 20 acres of peach and cherry trees in Orem, he maintains several orchards in Payson, Santaquin and Genola. All told, he takes care of 400 acres with 67,000 cherry, peach and apple trees. Many will disappear within 20 years; by then, Santaquin and Payson will become as congested as American Fork and Lehi are today, he told me. 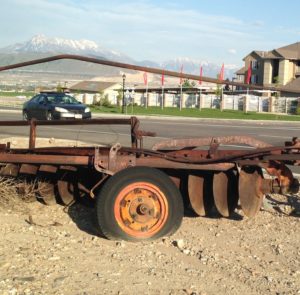 Realtor Bryan DeGroff agreed. DeGroff remembers cutting through another Orem orchard as a kid 30 years ago. Now, that orchard is gone and DeGroff lives in Santaquin where his wife wishes there were more amenities and shopping options. “I’ve told her, ‘wait five years. We’re going to have everything here,’” said DeGroff, who works for Coldwell-Banker. He’s right.

With the population growing at twice the national average, Utah will add another million people to its census by 2030, according to recent reports by the Utah legislature and the Governor’s Office. Salt Lake and Utah counties will bear 60 percent of that growth, the reports say.

In response, city and county planners are seeing housing and zoning trends starting to adjust. Acre lots with lawns, fences, and gardens are being forsaken. Apartments and townhouses are becoming new norms. “Large lot development is slowing down. We’re seeing higher density housing,” said one Salt Lake County planning specialist. “People are starting to live in townhouses and near public transportation. That cuts down on the consumption of raw grounds.” 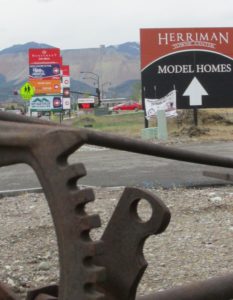 Billboards for housing units in Herriman

In other words, pack ‘em in.

DeGroff, the realtor, shared a market research report showing land from Lehi to Nephi (a 60-mile stretch following Interstate 15) as filling “solid” with homes in 10 years. As farmland disappears, so too are the farmers.

According to a report by Harvest Public Media, there are five farmers over 75 years old for every one younger than 25. Within the last generation, farmers’ average age has crept up 10 years to nearly 60.

“I love my job,” said Ercanbrack, who was born the same year his family planted those Orem peach trees 58 years ago. “It’s a hard job. It’s a dirty job. Nowadays, people don’t want that. They want to do high tech.”

His son is a doctor; his daughter a businesswoman.

“This is the end of the line. There are no more farmers in the family.”

Posted in Meeting folks, Of Utah Interest, Utah Wilderness and tagged decline of farming in Utah, development in Utah, population growth in Utah.