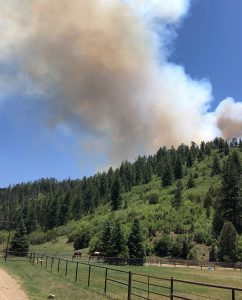 The fire activity as I left property

Last Sunday was like most others. After a lazy breakfast of tea and toast, I was ticking off my property project list. In the late morning, I gathered equipment – loppers, bug dope, and two quarts of water for myself and the dogs – for trail clearing east of my home. It was pleasantly hot and breezy.

I call this trail the Lollipop Loop: It heads east, up a draw that’s thick with scrub oak, Aspen, Ponderosa Pine, and Douglas Fir. The draw rises steeply on each side, from 7,500 feet to over 8,000. After a quarter mile, it forks, heading southeast and northeast. Head southeast and you’ll find my loop trail climbing 500 feet and crossing a ridge before dropping down to pick up the northeast gully. The path is lollipop-shaped, fun, rough going, and takes only a season to become overgrown and in need of trail clearing yet again.

After two sweaty hours, I’d run out of water and energy and was working my way back home, picking up cut branches and tossing them off the path. As I crossed the pasture and got back into cell service range, my phone rang. It was my friend, Wayne, who yelled through the line, “Maddy, there’s a fire in the canyon!” 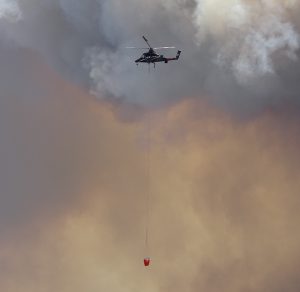 Like a cartoon figure, I stopped, pivoted, and cast my eyes on an enormous column of smoke. It had been billowing just hundreds of yards from where I’d been clearing trail. Deep in the gully, with the fire above me on the ridge, I had been happily oblivious.

Now, I was charged. I called another friend, ran to the garage, dropped my gear, and engaged my plan.

Plans actually go against my nature. Self-employed and spontaneous, a run, a ride, a social detour, or one of many property projects often interrupt my schedule. In fact, I stopped calling things “interruptions” and “schedules” a long time ago.

But for this dire moment, here in wildfire country, during a drought, with the scars of the massive 2012 Weber fire just across the road, I had a plan and moved quickly: 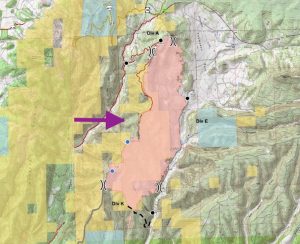 Arrow indicates my property. Pink indicates recent fire acreage, about a half mile from home

I called the dogs and raced into the house. I moved to the spare bedroom, grabbed my folder of essential documents, and put them in a suitcase. I left the dogs in the house, grabbed a water bottle, and paused to compose myself and my To-Do list:

Two friends arrived within minutes. My horses were haltered and loaded within a few more minutes. Dogs and suitcase loaded in a few more minutes. My phone started ringing and buzzing with texts and calls from friends and neighbors, who like me, received the rapid and repeated county emergency management text messages about the East Canyon fire and this area’s mandatory evacuation.

From Lollipop to Loaded in no time.

For years, I have reported on the need to be prepared. As a newspaper reporter, I covered wildfires and interviewed fire fighters and civilians. Never have I been an evacuee and had the logistical and adrenalin challenge that go with evacuation. 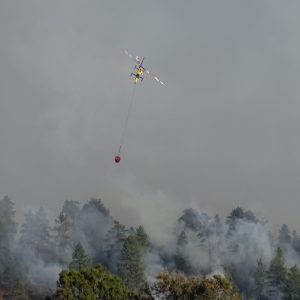 This week, I learned the importance of:

The fire has grown from an initial lightning strike to 3,000 acres in a few days and has brought in VLATs (Very Large Air Tankers) dropping slurry, helicopters with water buckets, and engine companies from across the country. It is a Type 2 fire, which is an indication of its complexity (involving structures in challenging terrain) and its size.

My neighbors and I are grateful to the firefighters and to our collective fire mitigation work over the years (supported by folks like Wildfire Adapted Partnership and local fire officials). Both elements have meant that no lives or structures have been lost. Safety has been the steady focus.

Fingers crossed, I’ll get back to my trails, hikes, rides, wildlife watching, and the spontaneous joys in the backcountry sometime soon.

Read this piece on the Unsung Heroes of the Rural West.