Editor’s Note: An abridged version of this opinion piece was published in the Colorado Sun. 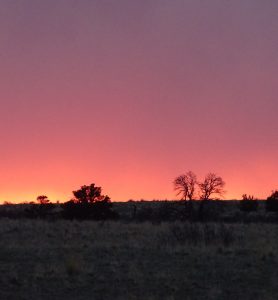 Two dogs, now gone, showed me how to consider the outdoors. Belle appreciated the landscape as a whole. She stopped, not just at the summit, but to tend to sounds and smells that called to her. On each journey, she paid attention to nuances of flora and fauna. Kip, meanwhile, focused narrowly on the path and on getting somewhere.

I consider people along this same continuum as they interact with the land: some embrace it holistically, with an almost genetic sensitivity to shifts in their surroundings. Others track along, oblivious to phenomena outside their path.

Among them, who are the environmentalists?

If you live in the suburbs or the city, if you’re active on social platforms, if you absorb mainstream media, you might think outdoor recreationalists are the frontrunners in environmentalism (which to me has fiscal, physical, and spiritual considerations).

As a kid growing up in Maine, I thought so, too. Family vacations were spent maintaining sections of the Appalachian Trail. While we flyfished and canoed benevolently near The Forks and Kokadjo, loggers sharing the same remote roads seemed rough, and, to use today’s vernacular, wholly extractive. On the waters off Harpswell, we were ceaselessly dodging lines and buoys set by lobstermen. What a hassle! 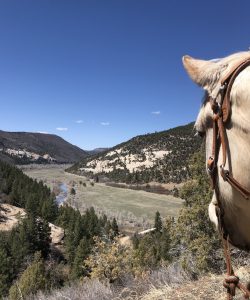 As an adult at events like the Outdoor Retailer, for which tens of thousands swarm the Colorado Convention Center, I further embraced the concept of recreationalist as environmental hero and benefactor. What outdoor company or organization doesn’t espouse a protect where we play ethos?

But do recreationalists pay it forward in any meaningful way beyond loyalty to brands like Patagonia and The North Face (which donate millions to environmental causes)?

In the rural West, it’s those working the land – often conservative, Bible-carrying, gun-toting ranchers and farmers – who are doing the most impressive conservation work. After them, it’s gun-and-rod toting hunters and anglers.

This goes against type and it challenges the notion that environmentalists are all left of center. It brings out the ‘conserve’ in conservative.

Maggie Hanna is a senior advisor with Colorado Cattlemen’s Agricultural Land Trust [CCALT], a PORT member which has conserved more than 637,000 acres. She’s also a fourth-generation rancher, living within a hundred miles of a million city dwellers. These urbanites are often transient, first-generation recreationalists who may not have long-term, land-centric interests at heart, she said.

Does the mountain biker who just dropped thousands on a full-suspension rig engage in any conservation efforts? Often not. Hanna and her colleagues work to involve non-agriculturalists and admits that “we have to do a better job of educating and sharing our stories,” she said.

Dan Malloy sees it on the California coast, too. “It’s classic to see the average pro surfer get way more props than the ethical fisherman who is putting thousands and thousands of meals on the table,” said Malloy, who surfed professionally and is an accomplished filmmaker. “Many, many people think of agriculturalists as bad guys. But these guys are not playing. They are not visiting. They are the real environmentalists.”

On the fiscal side, some have proposed recreational taxes or fees to offset the imbalance of public land use. Hunters, anglers, and ranchers all pay. Hikers, bikers, and climbers may not bring home a kill, but isn’t a killer day worth something? Isn’t extracting an experience still extraction?

As the big multi-use season of public lands kicks into high gear, getting to know each other would help. Pete Eschallier, co-owner of Kokopelli Bike & Board, in Cortez, Colorado, loves to see National Forest trails used by all. The other day he passed or was passed by runners, horse riders, and dirt bikers. “I had the warm fuzzies. I was super happy that there was a trail system that everybody was using,” said Eschallier.

Bikers may frighten and endanger horses and cows though. At the Sierra Foothills Conservancy, 150 miles east of San Jose, California, rangeland manager Billy Freeman runs 300 head of cattle over some of the thousands of acres owned or stewarded by the non-profit. 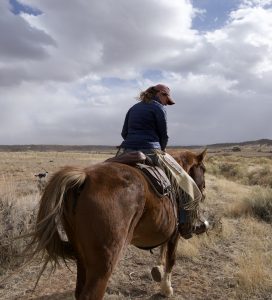 “If a mountain biker comes down the hill, fences can come down and animals can be hurt,” said Freeman. “Anything that moves fast is more of a problem.” The organization enlists “hiking docents” to educate recreationalists and interface with the cattle.

Horse and cow manure, lobster buoys and lines – they are just signs of people interacting differently.

Author E.B. White left New York City for Brooklin, Maine in 1938. It took him a while to acquire a more agrarian mindset, but ultimately he embraced the pace: “Being aware of surroundings and neighbors increases my sympathies.” Decades before the internet, he was chagrinned by people who “forget the primary and the near in favor of the secondary and remote” in which “more hours in every twenty-four will be spent digesting ideas, sounds, images – distant and concocted.”

Enjoying the outdoors is not about getting your nature fix. It’s not about the elevation gain or the epic selfie. It’s a communion for which you should ask yourself: How did I interact? How can I give back to that which gave me such fulfillment?