It’s the time of year when it seems like drivers kill more deer than hunters. In fact, that’s not so. But still.

According to AAA, 7,000 Colorado deer were killed in 2016. November is the worst month of all, says AAA. Blame development, habitat encroachment, or unmindful driving. They all contribute. 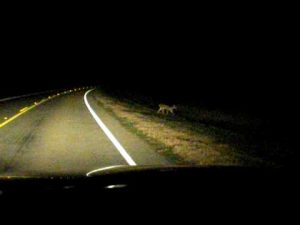 Be safe and be on the lookout.

Here are some tips for avoiding collisions and saving animals lives.

1. Keep your eyes moving back and forth. Continuously sweep your eyes across the road for signs of animals. While the most likely crash is caused by an animal darting in front of you, one might also run into the side of your car.

2. Be especially attentive in early morning and evening. Many animals, especially deer, are the most active during prime commuting hours — roughly 5 a.m. to 8 a.m. and 5 p.m. to 8 p.m.

3. At night, use high beams when there’s no oncoming traffic. Your brights can help you spot animals sooner. The light reflecting off their eyes may also reveal their location.

4. Slow down and watch for other deer to appear. Deer rarely travel alone, so if you see one, there are likely to be one or more nearby.

5. Honk your horn with one long blast. A long blast on your horn may frighten large animals, such as deer, away from your vehicle. The Insurance Information Institute advises against relying on devices such as deer whistles and reflectors, which have not been proven to reduce collisions with animals.

6. Use brakes if impact is imminent. If an animal is in your path, stay in your lane. Swerving away from animals can confuse them so they don’t know which way to run. It can also put you in the path of oncoming vehicles or cause you to crash into objects on the side of the road.

Posted in On the Road.