A few astute doctors are reporting a worrisome increase in brain-related cancers and diseases in and around Salt Lake County. 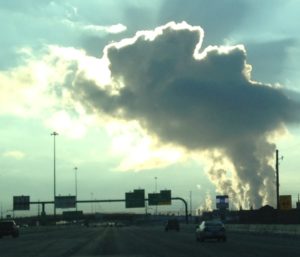 The state rate of Parkinson’s Disease is double the national average. Some think the PD numbers are even under-reported because of the dearth of qualified neurologists in Utah. Last year, the University of Utah established the first in the nation Parkinson’s Registry with doctors now being asked to report all cases.

Doctors have also observed a relatively high number of two rare neurological pathologies: glioblastomas and the logopenic variant of primary progression aphasia. The former is the most aggressive form of brain cancer. The latter is similar to Alzeimer’s but it attacks the brain’s language center, not the memory.

Got the heebie-jeebies yet?

Admittedly, sample sizes are small. But the Utah Physicians for a Healthy

Environment has a chock-full library of links to articles and papers making the case for the cruddy-environment-cruddy-health connection. Remember Woburn, Massachusetts? (where the rate of leukemia was linked to water contamination. The award-winning movie, A Civil Action, was based on those events.) How about Fallon, Nevada?

Our house sits above the dreaded Inversion (the nearly permanent layer of smog that sits on the valley). But some days, I’ve had a constant headache. It consistently coincides with the air quality. I feel for folks living in the thick of it.

So, why aren’t more folks jumping up and down, asking lawmakers, civic, industrial, and business partners to address these concerns?

Could it have something to do with the composition of the legislature (about 80 percent Republican)?

I talked with Dr. Brian Moench, board president of the Utah Physicians for a Healthy Environment. The group has lobbied successfully for cleaner air and last year won a significant court battle against a Salt Lake refinery. He pointed out the obvious:

Children at the Natural History Museum of Utah

advocates for clean air (and water and earth) swim against the tide in this state. Check out the UPHE library of research connecting environmental factors with illness.

I’m wondering which will trigger change: a greater uptick in disease or a downturn in the success of pollutant-contributing industries?

There’s a popular interactive exhibit at the Natural History Museum of Utah. It allows players to input populations and environmental factors to see just how very challenged Salt Lake County will be in a decade or two. The kids get it.