We regularly recommend books on NickerNews (another site in the family of Cayyuse Crest Communications). Why not here?

This first installment comes on finishing one of the most impressive non-fiction books I’ve read in years: Landmarks by Robert MacFarlane. 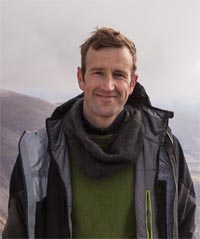 Landmarks is full of those moments one has an engaged reader: Ah-ha moments and passages that you immediately have to read again, not because they confound you but because they lift you to a deeper place of understanding and appreciation. Those are passages where I turn down the top corner of the page. My copy of Landmarks must have three dozen turn-downs or more.

MacFarlane refers to and pays homage to many American essayists, including Wendell Berry, Barry Lopez, and John Muir. His book is a celebration of language, time in nature and wilderness, and a deeply thoughtful conversation about the junction of those elements.

Although focused on the how the English are losing nature-centric words specific to the British Isles (peat, fog, mist, etc), he even writes of Keith Basso’s work with the Apache of western Arizona:

“The Apache understand how powerfully language constructs the human relation to place, and as such they possess, Basso writes, ‘a modest capacity for wonder and delight at the large tasks that small words can be made to perform.’ In their imagination geography and history are consubstantial. Placeless events are inconceivable, in that everything that happens must 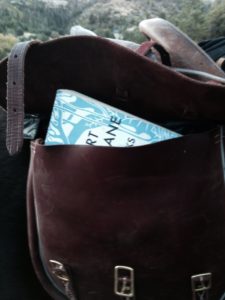 A worn, saddlebagged copy of Landmarks

Other books to consider, with leanings toward books of the western U.S.:

Hole in the Sky: A Memoir, by William Kittredge

Beyond the Hundredth Meridian, John Wesley Powell and the Second Opening of the West, by Wallace Stegner

All the West that Remains, by David Gessner. Read a three-part interview with Gessner here.

Send us your favorites!