The Outdoor Retailer is all about the selly-selly-sell. Thousands of outdoor gear exhibitors tout their latest socks, stoves,

skis, shoes, snowshoes, and shovels in the effort to wow thousands of buyers (or not). Increasingly, however, it’s also about organizing and affirming the outdoor industry’s growing political clout in order to tackle some serious and pressing issues of our generation: preservation of open space and public access to wilderness.

That’s why hundreds of OR exhibitors and attendees packed the 7am breakfast to hear Terry Tempest Williams give the Outdoor Industry Association’s keynote address.

Last year, former Secretary of the Interior, Bruce Babbitt, urged the OR audience to coalesce in the fight against the 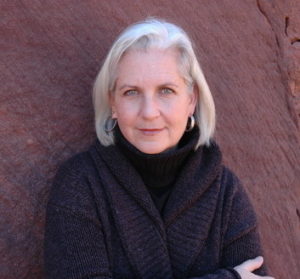 development, extraction industries, and the Bundy element. This year, Tempest Williams sent out a similar message, but with more passion, fewer stats, and a different (but equally troublesome) Bundy.

Tempest Williams traveled extensively to research her upcoming book, “The Hour of Land: A Personal Topography of America’s National Parks” (savvily timed with this year’s centennial celebration of the park system). The book promises to be “a meditation and manifesto on why wild lands matter to the soul of America,” says one press release.

At the podium last week, the author of “Refuge” and “When Women Were Birds” presented a map (complete with hashtags, search terms, and theme music) and emotional call for outdoor activism. Some highlights from her 50-minute talk:

Tempest Williams mentioned her recent visit to Paris, during the climate talks. She was particularly impressed by young demonstrators, who insisted they be heard, despite crackdowns by police after the city’s terrorist attacks. She marched with them.

…The young people were outraged. They marched. There were tens of thousands of them. They had huge red banners that said, ‘Keep it in the ground’ and ‘This is up to us.’”

Near the Eiffel Tower , she asked one of the demonstrators why he was there. He was a wildfire fighter from Fairbanks, Alaska, who witnessed six millions acres burn last summer. “I had to do something,” he told her.

“I returned home to Utah and I said, ‘what can I do?’…We can shut down these oil and gas leases on public lands. That’s what I’m going to do.”

She stepped down from the podium to a standing ovation.

SEO term: E.O. Wilson, half, earth (which discusses the author’s posit that half of the earth must be set aside as wilderness in order to have a sustainable, viable future for all living things. It also references the tentative title of Wilson’s upcoming book: Half Earth: The Struggle to Save the Rest of Life.)